The Global Fund to Fight HIV/AIDS, Tuberculosis and Malaria released their 2018 Results Report, announcing key achievements in countries where the Global Fund invests.

In 2017, the Global Fund reached 17.5 million people with anti-retroviral treatment, performed 79.1 million HIV diagnostic tests and reached 9.4 million people with HIV prevention program, according to a summary of the report. Additionally, allocations for HIV prevention for key populations are up by nearly 30 per cent for 2017-2019 over the previous funding period, underscoring the Global Fund’s 2017-2022 Strategy to boost investments in programs that support HIV prevention for key populations such as men who have sex with men (MSM), transgender people (TG), sex workers (SW), people who inject drugs (PWID) as well as among vulnerable populations such as young women and girls.

“The numbers in this report show how far we have come. We have in our sights, but not yet firmly in our grasp, the prospect of freeing communities from the burden of HIV, TB and malaria,” said Peter Sands, Executive Director of the Global Fund, in a news release of the report.

The 2018 Global Fund Results Report were presented in Paris, France, marking the launch of country’s preparation for the Sixth Replenishment Conference of the Global Fund. The 6th conference, which aims to raise private and public funding for the Global Fund’s 2020-2022 programming period, is due to take place in Lyon on the 10th of October 2019 and is considered to be a decisive moment for the near-term future of AIDS funding.

For the full news release, report, and a summary of the 2018 Results Report, please visit: 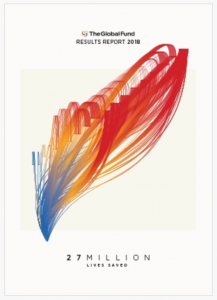