In recent years, governments have been increasingly pushed to use domestic resources to finance their national HIV responses. That push often originates from international aid and donor agencies that decide to ‘transition out’ of certain countries that supposedly have sufficient resources to finance their own HIV programs. In the wake of these transitions, innovative financing mechanisms are being piloted, especially to fund the civil society groups that often provide leadership in delivering critical HIV services to key populations. Such innovations in HIV financing are being initiated in Thailand.

In 2015, close to 90% of the $242 million spent on HIV programs in Thailand was sourced domestically. Given the Kingdom’s status as an upper-middle income country, donor agencies (like the Global Fund to Fight AIDS, Tuberculosis and Malaria) will be cutting off their financial contributions for such efforts in the coming years. However, despite the significant proportion of domestic funds invested in the HIV response, Thailand’s so-called transition is exacerbating existing challenges. For example, most of the domestic expenditure on HIV has been channeled to support HIV treatment services, while prevention services have largely been funded by external donors like the Global Fund; HIV prevention services, especially those targeting key populations – like men who have sex with men (MSM), people who inject drugs (PWID), and sex workers – are often implemented by civil society groups who depend on external funding for their activities.

To address those critical challenges, a number of mechanisms are being piloted. A report published in 2017 highlights a number of initiatives led by both government agencies and civil society groups in Thailand. A press release issued by the United States Agency for International Development (USAID) in March 2018 also highlights an innovative financing partnership where the National Health Security Office (NHSO) is providing domestic resources to a civil society organization – Mplus Foundation – to prevent HIV among MSM. And as of May 2018, a similar financing partnership is formally being piloted, with NHSO providing financial support toOzone Foundation, the leading civil society organization preventing HIV among PWID in Thailand.

The partnership between NHSO and Ozone Foundation is especially innovative given that the national government has been reluctant to invest in HIV prevention among PWID. An estimated $3.1 billion was spent on criminal justice components of drug control in 2015, compared to a measly $340 million spent on public health responses to drugs. That represents over 90% of resources being allocated to law enforcement, and less than 10% to health initiatives, out of which just 0.05% was spent on harm reduction among people who use drugs that same year.

Meanwhile, virtually all expenditure supporting HIV prevention programs targeting PWID has been historically sourced from external donors, with 80% of the $22 million spent on HIV prevention among PWID between 2004 and 2014 funded by the Global Fund; and in 2015, whilst over 10% of new infection were detected among this population, only 0.32% of the national HIV expenditure covered HIV prevention services among PWID. Essentially, for every dollar invested in harm reduction by the Global Fund and other international donors in 2015, the Thai government spent more than $1,900 to arrest, prosecute, and incarcerate the same people.

Harm Reduction International (HRI) is working with Ozone Foundation and other partners on the 10 by 20 campaign, a global effort to re-allocate 10% of funds earmarked for drug control by 2020 to support harm reduction interventions, including HIV prevention among PWID. In 2015, that 10% would have represented more than what has been spent on HIV prevention among PWID in the decade between 2004 and 2014!

An upcoming July 2018 report from HRI on the state of harm reduction funding in low and middle income countries underscores how urgent the need is to redirect funds from drug control to public health.

“Our report is set to show a dramatic fall in donor funding for harm reduction in low- and middle-income countries over the last decade. With many domestic governments failing to fill this funding gap, the lives of people who use drugs are being unnecessarily put at risk of HIV and hepatitis C, which of course presents a broader risk for public health. If governments are serious about ending AIDS by 2030, lifesaving harm reduction interventions must be fully-funded. Donors cannot withdraw funding from countries without there being a plan in place to protect the health and human rights of people who use drugs.” – Catherine Cook, Head of Research at Harm Reduction International

The pilot agreement with NHSO will allow Ozone Foundation to provide services to 500 PWID in Narathiwat. With current financial support from the Global Fund, Ozone Foundation is expected to reach over 9,000 additional PWID across 12 provinces by the end of 2018. 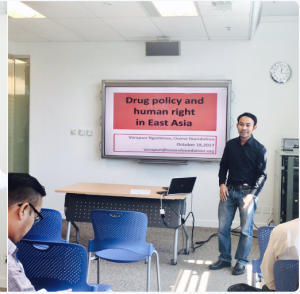 “If this pilot works out well, we could be looking at a much more sustainable financing model to support HIV prevention in Thailand. On a per-client-reached basis, the level of funding from NHSO is comparable to the level of funding we’re currently getting from the Global Fund. This means that we could potentially become fully funded through domestic budgets in the near future.” – Verapun Ngammee, Executive Director at Ozone Foundation.

PWID reached by Ozone Foundation are invited to access HIV testing services, with one additional follow-up in a 12-month period if test results are negative. If results of the test are positive, clients are immediately referred to hospitals and clinics that can provide antiretroviral treatment. In addition, Ozone’s clients have access to regular education sessions about HIV and other potential negative health impacts associated with injecting drug use, individual and group counseling, referrals to opioid substitution therapy, and commodities such as condoms and safe injecting supplies (like needles and syringes as well as alcohol swabs, filters and tourniquets). PWID clients are in contact with Ozone outreach workers and other health professionals at least twice per month.

For each of the 500 PWID reached under the pilot attangement in the deep south, Ozone receives THB 5,000 (~$156) from NHSO, for a total grant valued at THB 2,500,000 (~$77,853). In comparison, Mplus Foundation receives half of that amount for reaching MSM (THB 2,r client reached, or ~$78). Indeed, an analysis of the cost-effectiveness of the HIV response in Thailand revealed that prevention interventions amongst PWID were 11.9 times more costly than those targeting MSM. This important discrepancy is largely due to the cost of criminalization:

“Investments in criminal justice often create barriers for effective and evidence-based HIV services to reach populations like people who use and inject drugs. Essentially, the cost of public health services is driven up because criminal justice barriers need to be first overcome – the more a risk behavior like drug use is criminalized, the higher the cost of public health mechanisms to reach that group will be. Under the Sustainable HIV Financing in Transition (SHIFT) project funded by the Global Fund, our partners will soon be conducting research to formally assess the cost of criminalization in the context of HIV prevention, including in Thailand.” – Joselyn Pang, Manager of International Programs at the Australian Federation of AIDS Organisations

Criminalization is a powerful driver of the HIV epidemic. A 2017 study published in the influential Lancet journal “showed clear patterns of criminalization having negative effects on HIV prevention and treatment at the individual, programmatic, and population level.” The Global Commission on Drug Policy has also underlined that “fear of arrest drives persons who use drugs underground, away from HIV testing and HIV prevention services and into high-risk environments.” Indeed, a Thai client reached under a Global Fund-supported HIV prevention project implemented between 2009 and 2014 went on record, saying “I would rather get HIV than be (re) arrested!”

Ozone Foundation is one of very few organizations in Thailand that provides harm reduction services to PWID. The vast majority of groups working to prevent HIV transmission are targeting youth, MSM and sex workers.

“Thailand has successfully eliminated HIV transmission from mother-to–child which is a huge success for the country! In parallel, hundreds of NGOs are targeting young people, MSM and sex workers to stop HIV transmission. Yet there are only three or four NGOs in Thailand working to prevent HIV transmission among people who use drugs!” – Verapun Ngammee, Executive Director at Ozone Foundation

In this context, the innovative financing partnership between NHSO and Ozone Foundation is a landmark step forward for Thailand that will hopefully inspire other national agencies in the Kingdom and across the globe to scale up domestic investments in HIV prevention among PWID. Based on the total expenditure on drug control and HIV, it is clear that financial resources are amply sufficient and available in Thailand, though significant changes in allocations will need to take place over the coming years if Thai authorities are to successfully honour their national commitment of ending AIDS by 2030.

Download a pdf of the report here:  SHIFT – Innovative domestic financing for PWID in Thailand