Voicing Community Interest in the Global Fund: a new resource for communities living with HIV and Key Populations,  released by GNP+ and APN+

SHIFT reports on “Voicing Community Interest in the Global Fund”: a new resource for communities living with HIV and Key Populations,  released by GNP+ and APN+

“People Living with HIV hold strategic positions within CCMs and all too often these positions are ineffectively utilized,’’ says Omar Syarif, GNP+’s Program Manager, and author of this tool. “As such, it is critically important that communities affected by HIV are actively involved at all levels of Global Fund decision-making, and this involvement needs to be facilitated in a transparent, accountable and standardized manner, sensitive to local context.

A media release can be found here:
For more information about this tool, please contact Omar Syarif at OSyarif@gnpplus.net 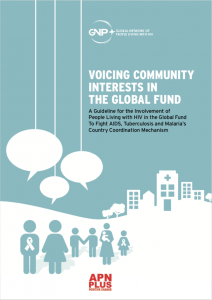 The full report can be downloaded: here.

The Asia Pacific Network of People Living with HIV/AIDS  is the network of PLHIV living in the Asia Pacific region. It was established in response to the need for a collective voice for PLWHA in the region, to better link regional PLHIV with GNP+ and positive networks throughout the world, and to support regional responses to widespread stigma and discrimination and better access to treatment and care.

*As previously reported on women4gf.org
—